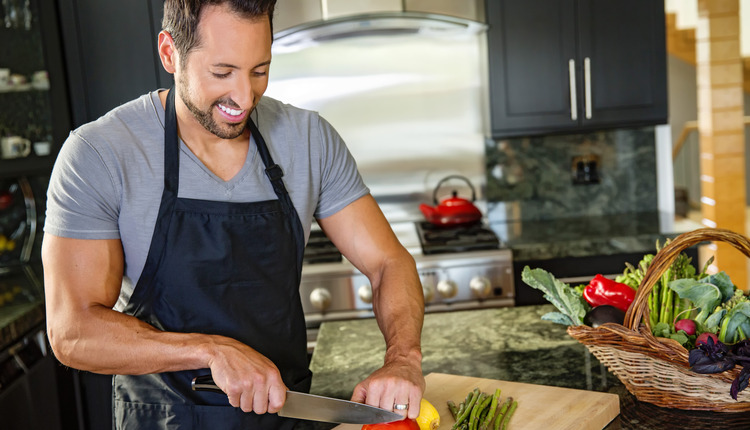 Jim White, our newly awarded 2017 PFP Trainer of the Year, describes himself as the “skinny kid on the block;” a self-conscious kid who wasn’t assertive; the kid who struggled with confidence up until he was 17 years old. Then Jim’s older brother, a bodybuilder, introduced him to weightlifting. Two years later, Jim went from a 135-pound “weakling” to 195 pounds of “solid muscle.” He saw how improving his body led to other changes in his life: his soaring energy and confidence gave him a completely new outlook on life and possibility. This mindset has been the driving force behind his journey to success that continues to impact millions of lives.

From improbable to unstoppable

Graduating high school with a “C” average and little confidence from his teachers that he would ever go to college, Jim realized that his newfound passion of fitness and health was something he could pursue as a career. He attended Youngstown State University in Ohio and graduated with honors and a degree in dietetics. He then attained his American College of Sports Medicine (ACSM) certification as a Health Fitness specialist.

In 2002, Jim moved to Virginia Beach with just $400 in his pocket, his education and a determination to change millions of lives – one person at a time. As a personal trainer, Jim began building his brand, business and reputation renting space in a gym and in the first three years helped hundreds achieve their goals with his nutrition and fitness coaching.

Jim took a leap of faith in 2005 and took over the gym where he was renting. While it was turnkey, it did require an investment and an entirely new set of business management skills. His challenge was not only to be a coach to his clients but also a leader to his staff and manager of his expanding business. Many reading this will identify with his experience; entering unfamiliar territory of managing and building a new business while trying to maintain the passion and practice of training. There were three principles he knew best on which Jim remained focused to overcome the inevitable obstacles in his path: 1) his passion for people, 2) his education in health and fitness and 3) his God-given talents.

From the outset, failure was never an option for Jim; he was committed to his vision and knew that in order to make it reality, he needed to reach out to people who could help him. Early on, he asked educators to help him learn about biomechanics and physiology; he asked local fitness business owners about how to start and run a business; he asked marketing experts how to grow a brand; he asked accountants and other professionals how to operate a sound business. He didn’t spend any money for any of these early mentorships, he simply took the risk and asked.

He credits his vision becoming reality to tenacity, sweat equity, hours worked when others weren’t, and a relentless focus on his mission. Over the 15 years in business, Jim says one of his best business decisions was diversifying. He now leads seven businesses: three gym facilities, a corporate wellness program, product sales, a medical nutrition therapy business, spokesperson and speaker and founder of a nonprofit.

In 2008, Jim published his first book entitled, Jim White’s Jumpstart Journal. In 2009, he launched a fitness magazine, Hampton Roads Fitness, available in the seven cities in Hampton Roads, Virginia. He is on the nutrition and fitness advisory board for Men’s Fitness and Oxygen magazines, is a regular contributor to RadioMD, has been featured in multiple mainstream television and media outlets and winner of several prestigious awards including the President’s Council on Fitness. These achievements helped give more credibility to his platform and his brand, leading to media opportunities, speaking requests and increased business at his gyms. However, most important to Jim, this recognition assures him that what he’s doing is making his vision a reality: making a difference in people’s lives.

Jim’s accomplishments and accolades grew impressively in his business, his community and as a national spokesperson in the industry over 15 years; but this didn’t come easily nor did it come without risk.

The early years were exciting, and his tenacity, self-study and sweat equity were paying off. A year after opening, Jim opened another facility and shortly after, closed one of his locations to expand to a larger facility.

When the economy took a downturn, his business felt the consequences. He adjusted his services to offer more cost-effective programs in addition to his higher-value services and he integrated some of the more reputable trends short-term in order to bridge financial gaps. He also learned the importance of building emergency funds and diversifying to remain resilient.

Jim shares that while one of his greatest accomplishments is his three-location fitness company – voted one of the top personal training gyms by Virginia Living – finding a loyal team was challenging for him after several experiences of employees leaving and taking clients. Realizing the industry can be cutthroat at times, he decided to overcome these situations by “blessing and releasing” those who weren’t loyal and rehiring quality employees with a motto of “Complete, not compete.” This has allowed him to grow his business in a more positive way alongside a staff of 28 dedicated team members.

While Jim is proud of the success of his businesses, he finds the greatest personal and professional satisfaction in the opportunities he’s had to give back to his community. In 2010, he created a non-profit called the Jim White Fitness Foundation. One of the programs offered through the foundation is called LIFT (Lifting Spirits, Improving Bodies, Feeding Souls and Transforming Lives). LIFT is a 90-day fitness and nutrition program to help people in need including the homeless, battered woman, at-risk youth and mentally ill. The goal is to help them get in shape that will lead to employment. This is certainly a passion project Jim is proud to lead.

Giving back to the industry is also important to Jim. He has served and continues to serve as board member, spokesperson and advisor to many of the industry’s most respected associations and organizations. A primary mission for his service in these positions is to increase the credibility of the fitness industry by promoting the benefits of getting a career in the field of fitness, the importance of earning an NCCA-accredited certification and how to stay true to science and research of the field. He offers internships in his gyms and is always open to mentoring newer professionals to the industry.

Jim White wears many hats on a daily basis as personal trainer, registered dietitian, manager, marketing specialist, sales consultant, finance manager, business analyst/strategist, executive board director and CEO. He certainly is an example of how to take a vision and make it a successful reality. Yet perhaps what is most impressive about Jim’s story is not the lists of awards and recognition he’s earned or the successful business models he’s created; rather it’s the impact he has had because of his commitment to his core principles: 1) his passion for people, 2) his education and 3) his God-given talents. His relentless commitment has given him the confidence to create a vision, not fear risks in order to pursue that vision and follow through over and over again so that thousands of lives may be transformed.

Favorite quote: “The struggle you’re in today is developing the strength you need tomorrow”

Front Plank Resisted Hip Abduction Next
What are your clients taking before workouts? Previous
More from Features