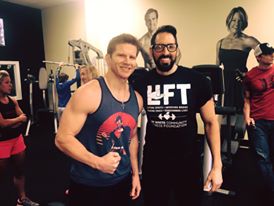 Jim White, a 2017 PFP Trainer of the Month award winner, owner of Jim White Fitness & Nutrition Studios based in Norfolk, Virginia and widely recognized authority on fitness and nutrition, exemplifies the highest professionalism and standards in our industry. Here is how Jim is playing his part in raising the bar in fitness.

What inspired you to start your business?
A vision. I moved to Virginia Beach with $400 in my pocket, a passion for fitness and a college degree in Nutrition. I had no business sense at the time, no connections and no assistance but knew I wanted to start a business. With my back against the wall, I took my vision, watered it with hard work, persistence and dedication which in turn started and grew a business that has been going 10 years strong.

What is one hard lesson you’ve learned in business you believe has been most valuable?
Don’t work too hard. I know this is the opposite of what a typical entrepreneur says but it is true. In the beginning of my career, I worked 16 hours a day, seven days a week and got burned out. The burnout turned into a positive and led me to now work smarter, not harder and find ways to balance work with family, faith and my own fitness. Since this change, we’ve been able to grow even more as a company and I’m able to enjoy life much more.

If I asked one of your clients why they choose you over other gyms, what would they likely say?
The results speak for themselves. My team and I have helped 1000s of people lose 10s of 1000s pounds, helped many battle through cancer, eating disorders and other health issues and brought hope to the majority. We inspire people to believe in themselves which, in turn, dramatically changes their life for the better.

Name one or two ways you are trying to raise the bar in the industry.
There are many fitness and nutrition myths, fads and inconsistent clutter out there getting sensationalized through the media. As a spokesman for the Academy of Nutrition and Dietetics and the American College of Sports Medicine I feel it is my mission to debunk the myths and fads and clear the clutter by providing accurate science-based information to the media to help enhance the health of the public and keep our industry credible.

Thank you Jim for helping to raise the bar in the industry!

Half kneeling hip flexor stretch Next